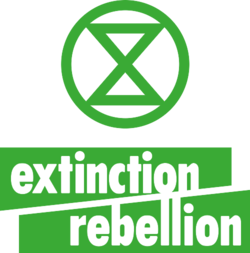 Website.uk, Website.intl
Extinction Rebellion, launched on Oct.31.2018, emerged from the #Rising Up! network. ER demands that the govt tell the hard truth about the climate and wider ecological emergency to citizens, and to reverse inconsistent policies, to come up with a credible plan for a rapid decarbonisation of our economy. A national Citizens' Assembly will oversee the changes, as part of creating a democracy fit for purpose. ref, ref

Overpopulation is the root of our troubles. Too many people, coupled with over-consumption, is driving societal collapse. As history has demonstrated many times, such a collapse is the perfect breeding ground for authoritarianism, totalitarianism, and fascism. The warning signs are being ignored because denial is more comfortable than truth. World War II taught us what humans are capable to doing to each other under extreme circumstances.

Survival of the Richest: our govts are well aware of the problem, and so are their super-wealthy mates, who are plotting to escape "The Event", as they call it.[1] Year on year, CO2 levels have been rising; 2017 was the highest ever, and 2018 will top it. Forget Carbon Capture and Storage - trials have shown it isn't going to cut the mustard.

The Right of Revolution: rebellion is justified, once the establishment fails. When a govt breaks the Social Contract

, and fails to protect the lives of its citizens, the people have the right to rebel. Playing nice - petitions, demonstrations, lobbying your MP - is inappropriate now. Action needs to be disruptive in order to have an impact.

If you are broadly in agreement with our principles and values, and the urgent need for an international, peaceful "war-level" mobilisation of the people to combat govts' inaction on climate breakdown, then you are cordially invited to write for the Extinction Rebellion Blog.

Rising Up! had its roots in a partnership of ~5,000 activists from other movements,[2] which came together to create a social movement calling for a fundamental change of the political and economic system to one which maximises wellbeing and minimises harm. They believe that confrontation through mass civil disobedience is necessary.[3]

The Party is Over. The current path of humanity is ecocidal, undemocratic and unjust. Corruption, vested interest, economic policies and legal frameworks maintain the status quo. Many alternatives exist, but they are rarely discussed in the media, largely owned by establishment billionaire$. Movements for change are pacified in a number of ways; they are hampered by a lack of alignment and restrained by feelings of powerlessness. Yet there is a groundswell, a longing for change, a sense of urgency.

CO2: There is a 1% chance of hitting the 1.5°C Paris Agreement target. We are poised on the precipice of a runaway feedback loop: temperatures are currently at just over 1°C, and rising. The Paris Agreement was just promises; there are no enforcement mechansims. Fossil-fuel invested corporations must agree emissions reductions, under threat of enforcement if they don’t comply – otherwise they will carry on until we are all dead. As citizens, we must pressure our govts to set legally binding, immediately enforceable, greenhouse gas reduction measures. Mass civil disobedience to achieve this aim is now the safest and most viable option in the short time-frame that we have.
At 3°C, the Amazon will burn; crops fail; rapid desertification; mass migrations - internally, as well as from other countries. Coupled with global pollution and increasing soil erosion, even the most optimistic scientific predictions are very dire.
The most devastating extinction event ever was triggered by runaway climate change - the Permian-Triassic

Non-Violent Direct Action: Rising Up! initiates and promotes campaigns of non-violent civil disobedience, which may include law-breaking. They believe this is necessary as a means to respond to scientifically attested ecological threats, and to challenge gross social injustices, as has happened many times in the past such as with the suffragettes, the civil rights movement in the USA, the Indian Independence movement, and the Rights to Roam in the UK.[4][5] Guide.

This isn’t about “smashing the system”, then starting from scratch. We can reuse and up-cycle the tools, processes and structures that we currently have, to serve all of humanity and to protect life on earth. This is about sharing and stewardship. A wealthy establishment has promoted an economy which serves them, in which there is “one rule for the 1% and another rule for the rest of us”. We need to teach them to share.ref