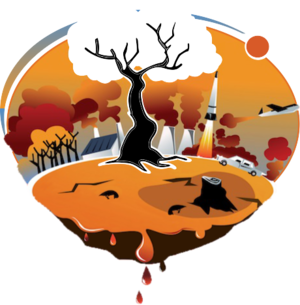 Why does deforestation matter?

We all depend on forests. Stopping deforestation would deliver up to 30% of the solution to tackling climate change. But only 15% now remain intact (2017). The majority of this deforestation is carried out to produce globally-traded commodities such as soy, beef, palm oil, timber, and pulp and paper. These commodities end up in 50% of the products in our supermarkets - but they could be produced sustainably. 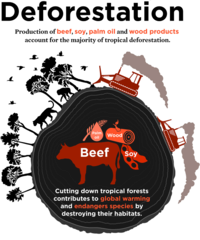 Deforestation is being brought about by just 4 commodities ref. Other contributors are coffee, rubber, cocoa, and sugar - but none currently has an impact even near the Big Four. And all of them are driven by human population increase.

Ultimate responsibility lies with the EU govts whose job it is to implement and enforce the law. Implementation of the EUTR in the most important EU Member States for Ukrainian wood imports has been poor. The report showed many of the same EU timber processing giants found to be consuming suspect wood were lobbying. The EU's greatest influence has been forcing the Ukrainian govt to overturn its log export ban of Apr.2015, maintaining that the ban contravenes the free-trade terms of its May.2015 €1.8 bn loan agreement with Ukraine, and has repeatedly withheld large tranches of that cash in order to try to force the govt to overturn it. In Dec.2017, the EU cancelled the final €600m payment, with one of the 4 reasons cited being the continued failure by the Ukrainian authorities to implement their earlier promise to repeal the ban. Opponents of the EU's action note that the wider 2014 Association Agreement between the two jurisdictions allows for trade restrictions where they are justified on the grounds of public policy and to protect nature. By seeking to force Ukraine to overturn the ban, the EU was itself arguably in breach of the other terms of the agreement under which it commits to support efforts to prevent corruption, illegal logging and cross-border trade in stolen goods. Ukrainian commentators have alleged that the real reason the EU is pressuring for the lifting of the ban is that a number of large EU wood processing companies are enriching themselves on a ready supply of cheap, likely-illegal, logs from Ukraine. Many of the same giant firms which have been buying Ukrainian wood tainted with evidence of possible illegality and corruption have been actively pressuring the European Commission to force Ukraine to overturn the ban. Schweighofer, the company most affected by the ban, has reportedly pushed for it to be lifted through the European Organisation of the Sawmill Industry, a Brussels-based lobbying group. The Confederation of European Paper Industries (CEPI) has also been lobbying the European Commission hard regarding the ban. Both Mondi and International Paper have seats on the CEPI Board, while Lenzing and Bukoza are represented by their national associations. Both Mondi and Lenzing admitted to Earthsight to having lobbied the Commission regarding the ban, via trade associations of which they are members. All of these companies were substantial consumers of Ukrainian logs prior to the ban. This report shows all of them have also received suspect wood. (p.54-55)

The UK's Tax Haven status helps - a very large proportion of Ukraine’s wood exports to the EU continue to be traded via UK letterbox companies. A quarter of all the ‘fuelwood’ trade from Ukraine to the EU continues to pass through these firms, as does at least 7 per cent of all the sawn wood.157 one of the largest traders of Ukrainian timber to the EU has been the ‘Osuna Group’, http://osuna-group.com/ ... incorporated in the UK for various reasons including the “predictability and attractiveness of the legal system”

and its “double-taxation and investment protection treaties”.

The main focus of the EU’s efforts on tackling illegal logging has been on tropical forests.

Egger, Kronospan, Swiss-Krono and International Paper all remained among Klesivske SFE’s top customers long after its FSC certificate was terminated in Aug.2017.[280] These 4 firms have continued to purchase timber from govt suppliers in Rivne province (Ukraine’s 3rd largest timber producer) whose senior officials are the subject of multiple serious investigations for timber-related corruption. All of the firms insist that they are in full compliance with EUTR - but this is BS.p.38

What we can do

Take away the market. ~70% of Ukraine's timber is exported to Europe. Pressure the end-users: Ikea, Obi, Baumarket, Hornbach, Homebase, HP, ...
Earthsight publishes a Guide Book for Acitvists and Communities "Investigating Illegal Timber". It includes detailed guidance on the sources of information and tools that can be used to find out if timber is being illegal harvested, traded and sold to sensitive markets. link

Another important culprit is the Forest Stewardship Council, the world’s leading forest certification organisation. Originally founded in the early 1990s by environmentalists and progressive industry leaders to help consumers identify sustainably produced wood products, FSC has been the subject of increasing criticism in recent years. Its rapid growth has been accompanied by a gradual weakening of standards, and a steady stream of scandals where FSC-certified companies were shown to have been involved in everything from illegal logging to human rights abuses. Though it was never its principal purpose, the FSC’s systems include checks on the legality of timber as well its sustainability.

This report shows that FSC has fundamental flaws which mean it cannot currently be relied on to ensure legality in Ukraine. Most of the illegal sanitary felling sites we found in the Carpathian region are in FSC- certified forests, for example, and most of the SFEs which are the subject of serious criminal corruption investigations have nevertheless remained certified. ref (also see p.49)