From WikiCorporates
(Redirected from FAO)
Jump to navigation Jump to search 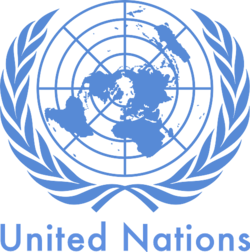 Notes: Representing the UN with a tree structure won't do, since various organs share responsibilities. Job for Draw.io, or can possibly use a MindMap - see MindNode > United Nations: UN System. Chart taken from UN:System Chart. Note it is not correct, as a simple tree cannot demonstrate shared organs very well. Could also have the relevant section opposite the text...
See also UN:Main Organs + United Nations § Structure

See also "The UN System", good place to start. Also UN System, and UN Directory. Note the "Chief Executives Board for Coordination" is v.important wrt the UN.
What we do, News, Annual Reports, For journalists, Dcouments, Main Organs

WIP: Fit these in where they belong:

Chief Executives Board for Coordination

Website, The CEB
The CEB brings together the executive heads of 31 specialised organisations to deliver as one at the global, regional and country levels. It is the prime instrument for strengthening the coordination role of UN inter-governmental bodies on social, economic and related matters.

The membership of the CEB includes: the United Nations; 15 specialised agencies established by intergovernmental agreement; 3 Related Organizations; and 12 funds and programmes created by the United Nations General Assembly. IOM is the newest member to join the CEB. The United Nations (the Secretariat); ILO, FAO, UNESCO, ICAO, WHO, World Bank Group, IMF, UPU, ITU, WMO, IMO, WIPO, IFAD, UNIDO, UNWTO, IAEA, WTO, IOM, UNCTAD, UNDP, UNEP, UNHCR, UNRWA, UNICEF, UNFPA, WFP, UNODC, UN-Habitat, UN-Women, UNOPS. ref
The High Level Committee on Management (HLCM) is responsible to the Chief Executives Board for coherent, efficient and cost‐effective management across the United Nations system of organisations. It is composed of the most senior managers of each CEB member organisation. See HCLM Strategic Plan ref
The Legal Advisors Network was initiated in Sept.2007, with the aim of increasing communication among legal advisers across the system, develop consultation and knowledge sharing mechanisms to address issues of common concern and ensure, where appropriate, a better dissemination of relevant guidelines, policies and practices. It also supports a better understanding of the needs of the various bodies for which the Office of Legal Affairs (OLA) provides central legal services. ref

UNCDF makes public and private finance work for the poor in the world’s 47 least developed countries.

UN Office on Drugs and Crime

UNICEF works in 190 countries and territories to save children’s lives, to defend their rights, and to help them fulfil their potential, from early childhood through adolescence. ref UNICEF's programmes are grounded in research; their website has an Interactive Data Visualisation page to help understand the data analysis.

UNEP was founded in Jun.1972 after the UN Conference on the Human Environment. It is responsible for a number of environmental issues concerning various UN agencies. Some of these responsibilities include: developing international environmental agreements, encouraging environmental science, and creating development policies with national governments. Experts of the UNEP have contributed to guidelines of treaties and policies in terms of potential contaminants. United Nations Environment Programme

UNEP FI is a unique partnership between UNEP and the global financial sector. UNEP FI works closely with over 200 financial institutions that are signatories to the UNEP FI Statement on Sustainable Development, and a range of partner organisations, to develop and promote linkages between sustainability and financial performance. Through peer-to-peer networks, research and training, UNEP FI carries out its mission to identify, promote, and realise the adoption of best environmental and sustainability practice at all levels of financial institution operations.ref

The Security Council has primary responsibility, under the UN Charter, for the maintenance of international peace and security. It has 15 Members (5 permanent and 10 non-permanent members) link. Each Member has one vote. Under the Charter, all Member States are obligated to comply with Council decisions. The Security Council takes the lead in determining the existence of a threat to the peace or act of aggression. It calls upon the parties to a dispute to settle it by peaceful means and recommends methods of adjustment or terms of settlement. In some cases, the Security Council can resort to imposing sanctions or even authorize the use of force to maintain or restore international peace and security. The Security Council has a Presidency, which rotates, and changes, every month (link). ref

The International Atomic Energy Agency is the world's central inter-governmental forum for scientific and technical co-operation in the nuclear field. It works for the safe, secure and peaceful uses of nuclear science and technology, contributing to international peace and security and the United Nations' Sustainable Development Goals. The Agency was set up as the world’s "Atoms for Peace" organisation within the United Nations family. It was given the mandate to work worldwide to promote safe, secure and peaceful nuclear technologies. The IAEA has a dual mission to "accelerate and enlarge the contribution of atomic energy to peace, health and prosperity", and to "ensure ... that assistance provided ... is not used in such a way as to further any military purpose". Reports to both the Security Council and the General Assembly. ref, ref. International Atomic Energy Agency

The Economic and Social Council is the principal body for coordination, policy review, policy dialogue and recommendations on economic, social and environmental issues, as well as implementation of internationally agreed development goals. It serves as the central mechanism for activities of the UN system and its specialized agencies in the economic, social and environmental fields, supervising subsidiary and expert bodies. It has 54 Members (link), elected by the General Assembly for overlapping three-year terms. It is the United Nations’ central platform for reflection, debate, and innovative thinking on sustainable development. ref

Specialized agencies are legally independent international organisations with their own rules, membership, organs and financial resources, were brought into relationship with the United Nations through negotiated agreements. Some of the agencies existed before WW1, some were associated with the League of Nations

, others were created at almost the same time as the United Nations, and yet others were created by the United Nations itself to meet emerging needs. Specialised agencies work with the UN and each other through the coordinating machinery of ECOSOC at the intergovernmental level, and through the Chief Executives Board for Coordination (CEB) at the inter-secretariat level. ref See also UN:Specialised Agencies + United Nations § Specialized agencies

The aim of the FAO is to: raise levels of nutrition and standards of living; secure improvements in food production and distribution; better the conditions of rural people and; contribute toward an expanding world economy and ensure freedom from hunger. ref

The ICAO, in charge of reducing the carbon footprint of international aviation, has little or no public scrutiny. Its agenda and discussion documents are not released to the public or the international press, and meetings are not open to the media. Anyone who leaks documents being discussed faces “unlimited liability for confidentiality breaches”.

ilo.org
ILO, the only tripartite UN agency, brings together govts, employers and workers representatives of 187 member States, to set labour standards, develop policies and devise programmes promoting decent work for all women and men. The ILO accomplishes its work through 3 main bodies which comprise govts', employers' and workers' representatives. ref

unesco.org
UNESCO was established in 1945 to to contribute to peace and security by promoting collaboration among nations through education, science and culture.ref

Website
WHO is the directing and coordinating authority on international health within the United Nations' system. Its objectives are "the attainment by all peoples of the highest possible level of health".ref We do this by providing leadership, shaping the research agenda, setting norms and standards, articulating ethical and evidence-based policy options; providing technical support; and monitoring the health situation and assessing health trends.ref
See main article: World Health Organisation

The Secretariat comprises the Secretary-General (link) and tens of thousands of international UN staff members who carry out the day-to-day work of the UN as mandated by the General Assembly and the Organization's other principal organs. The Secretary-General is chief administrative officer (link) of the Organization, appointed by the General Assembly on the recommendation of the Security Council for a five-year, renewable term. UN staff members are recruited internationally and locally, and work in duty stations and on peacekeeping missions all around the world. But serving the cause of peace in a violent world is a dangerous occupation. Since the founding of the United Nations, hundreds of brave men and women have given their lives in its service.

UN Office for the Coordination of Humanitarian Affairs

UN Office of the High Commissioner for Human Rights

The International Court of Justice is the principal judicial organ of the United Nations. Its seat is at the Peace Palace in the Hague (Netherlands). It is the only one of the six principal organs of the United Nations not located in New York (United States of America). The Court’s role is to settle, in accordance with international law, legal disputes submitted to it by States and to give advisory opinions on legal questions referred to it by authorized United Nations organs and specialized agencies. ref

The Trusteeship Council was established in 1945 by the UN Charter, under Chapter XIII, to provide international supervision for 11 Trust Territories that had been placed under the administration of seven Member States, and ensure that adequate steps were taken to prepare the Territories for self-government and independence. By 1994, all Trust Territories had attained self-government or independence. The Trusteeship Council suspended operation on 1 November 1994. By a resolution adopted on 25 May 1994, the Council amended its rules of procedure to drop the obligation to meet annually and agreed to meet as occasion required -- by its decision or the decision of its President, or at the request of a majority of its members or the General Assembly or the Security Council. ref

unwater.org
There is no single UN entity dedicated exclusively to water issues. Over 30 UN organisations carry out water and sanitation programmes, reflecting the fact that water issues run through all of the UN’s main focus areas. UN-Water’s role is to coordinate so that the UN family ‘delivers as one’ in response to water related challenges. ref

The Compact is a call to companies to align strategies and operations with Ten Principles on human rights, labour, environment and Anti-Corruption; and to take actions that advance societal goals. ref, p.5

The Global Compact for Safe, Orderly and Regular Migration is an inter-governmentally negotiated agreement, prepared under the auspices of the United Nations, which is the first-ever UN global agreement on a common approach to international migration in all its dimensions. ref, ref

The PRI is the world’s leading proponent of responsible investment. The PRI encourages investors to use responsible investment to enhance returns and better manage risks, but does not operate for its own profit; it engages with global policymakers but is not associated with any govt; it is supported by, but not part of, the United Nations. The PRI has two UN partners – § UNEP Finance Initiative and § UN Global Compact – which play an important role in delivering the PRI’s strategy.
The six Principles for Responsible Investment, developed by investors, for investors, are a voluntary and aspirational set of investment principles that offer a menu of possible actions for incorporating ESG issues into investment practice.About, How ESG engagement creates value for both companies and investors

ToDo: This needs to be on its own page.