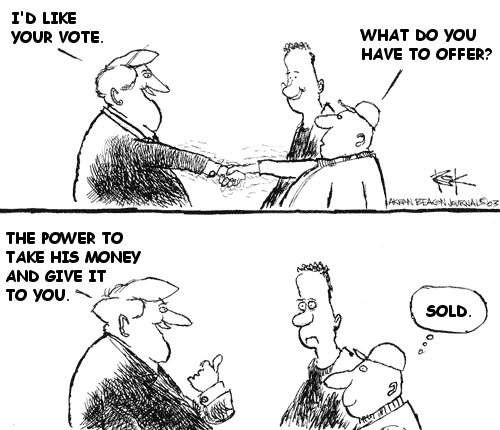 Unfortunately, this is not a joke.

Thatcher sold her privatisation policies on the basis of "efficiency". Before Mrs Thatcher came to power in May.1979, individuals held ~40% of shares in UK companies. By 1981, it was less than 30% and, by the time she died in Apr.2013, it had slumped to under 12%.[1] An ever-growing body of work is asserting that the true forceful driver was to stimulate capital accumulation - IOW, to benefit shareholders. Consumers are merely the captive means to this end.[2]

The reality of privatising essential services is that what is being sold is not infrastructure, but bill-paying citizens, and what is being privatised is not infrastructure, but taxation. The govt is selling the right to tax customers through their bills; and because the hidden taxes in electricity bills take no account of people’s ability to pay, the poorer you are, the bigger contribution you make.

Does it matter that our infrastructure no longer belongs to us? Thatcher said privatisaton was giving "power back to the people", and that competition would free British enterprise to lead the world. It is now clear that the result of privatisation has been to take power away from the people.
What has happened is not what Thatcher's Conservatives promised or intended when they put Britain’s state-owned industries on the block - but the result of their actions is that decisions are no longer Britain's. Thatcher promised less state involvement in industry, but the future of Britain's infrastructure now hinges on Li Ka-shing (Hong Kong), CK Hutchison Holdings (Hong Kong), the PPL Corporation (USA), Iberdrola SA (Spain), Macquarie (Australia), and so on.
The problem with the ideal of competition is that there are winners and losers. The competition has now been held. It is over, and Britain lost. From the point of view of technology and capital, Britain is no longer a centre; it is another centre’s province.ref (paraphrased)

Thatcher's Conservatives - and its ideologues following since - have cheerily (or ignorantly) overlooked the origins of the word "privatisation". It comes from the German word "Reprivatisierung", first used in academic literature in an analysis of Hitler's programme. The author wrote that the Nazi Party 'facilitates the accumulation of private fortunes and industrial empires by its foremost members and collaborators through "privatisation" and other measures, thereby intensifying centralisation of economic affairs and government in an increasingly narrow group that may for all practical purposes be termed the national socialist elite'. Quarterly Journal of Economics, Sidney Merlin, 1943 And so it has turned out.

British Technology Group: The National Enterprise Board was combined with the National Research Development Corporation to form a new, non-statutory body.ref It primarily acted to license and commercialise the use of publicly-funded developments. In 1992, BTG was soldgifted to private equity group Cinven, and floated on the London Stock Exchange in 1995. It was taken over by USA firm ref Boston Scientific Corporation in Aug.2019.

BA's float in 1987, under one of Thatcher's favourite businessmen, John King, Baron King of Wartnaby

, was heavily oversubscribed. Since then, the fleet has grown from 164 aircraft to 273 and annual passengers have risen from 17.3m to 37.6m. British Airways is now owned by International Airlines Group.

A number of big companies, including Jaguar (now owned by India’s Tata) and the FTSE 100 engine maker Rolls-Royce were also privatised under Lady Thatcher.

Ownership of the original Rover Group marques is currently split between BMW (Germany), SAIC (China), and Tata Motors (India), the latter owning the Rover marque itself with its subsidiary Jaguar Land Rover owning much of the assets of the historic Rover company.
The Rover Group initially included the Austin Rover Group car business (comprising the Austin, Rover, Mini and MG marques), Land Rover Group, Freight Rover vans and Leyland Trucks. The Rover Group also owned the dormant trademarks from the many companies that had merged into British Leyland and its predecessors such as Triumph, Morris, Wolseley, Riley and Alvis.

British Leyland was an automotive engineering and manufacturing conglomerate. It incorporated much of the British-owned motor vehicle industry, which in 1968 had a 40% share of the UK car market,[1] with its history going back to 1895.

British Motor Holdings Ltd was a British vehicle manufacturing company, created as a holding company following the BMC's takeover of both Jaguar Cars and the Pressed Steel Company in that year.

BMC was a UK-based vehicle manufacturer, formed in early 1952.

. A horrible tangle to unweave.

The English Steel Corporation Ltd was a UK steel producer, jointly owned by Cammell Laird and Vickers. It was formed to bring together their basic steel making interests, principally in the Sheffield area but also including a plant in Openshaw, Manchester.

The Agency sold off all of the nationalised companies with the exception of the largest, Richard Thomas & Baldwins. This remained in public ownership, and was absorbed into the British Steel Corporation when the industry was re-nationalised in 1967 by the Labour government of Harold Wilson.

The Iron and Steel Corporation of Great Britain was a nationalised industry, set up by Clement Attlee's Labour govt. Nationalisation of steel production was strongly resisted by the Conservative opposition. On returning to power, they instructed the Corporation to make no change to the structure of the industry and instead made plans for its return to the private sector.

FixMe: This needs consolidation with Vodafone Group plc to rm duplication. Do an import of the relevant section(s).

For the more recent history of the postal system in the United Kingdom, see the articles Royal Mail and Post Office Ltd.

1998: The assets of Magnox Electric were combined with BNFL (and eventually operated and managed by US-based EnergySolutions through its Jun.2007 acquisition of the BFNL subsidiary - Reactor Sites Management Company).ref

Once the sales were complete, there was a perception by many that energy markets were now to be treated like those of many other goods and services – subject to safeguards, but not in need of special attention. It is no accident that the position of energy within Whitehall was downgraded – from having its own department in 1980 to being part of a wider portfolio of one junior Minister in 1997.ref (2010)