ToDo: This article also contains a decent list of polling companies. Plus quite a bit of other useful stuff, eg. lists of think tanks and what their spectrum is.

An opinion poll, also called a poll or survey, aims to find out what people think about a particular topic. A representative sample of people are chosen and asked the same questions. The Collins English Dictionary says: “An opinion poll involves asking people’s opinions on a particular subject, especially one concerning politics.”

Some polling companies, such as YouGov, use Internet surveys with volunteers. Others, such as Survation, also use telephone and face-to-face interviews, as well as the Internet.

A poll usually has a set of choices from which a person may choose. The number of people that select each choice is recorded. These numbers are then written as percentages of the overall group. This gives a general idea of how many people in a certain group agree or disagree on a certain topic.

How Accurate Are Opinion Polls? 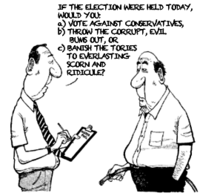 Opinion polls never claim to be 100% accurate., because none of them can perfectly reflect opinions in the whole population. The only sure-fire way of being completely certain would be to interview everyone. Polling companies therefore use statistical methods to try to reduce errors and biases.

Wording of Questions: The proper wording and phrasing of the questions, the order in which they are asked, and the number and form of alternative answers are vitally important to producing reliable, objective data. For example, a voter may be more likely to support someone who is described as "one of the leading candidates".

Response Bias: People may not answer questions truthfully for many reasons. For example, some may be embarrassed; others may not understand the questions; and some may answer hastily to get to the end.

Opinion poll results can sometimes influence the behaviour of voters. As Peter Hitchens[1] famously said "Opinion polls are a device for influencing public opinion, not a device for measuring it. Crack that, and it all makes sense". There are two groups of theories about how voters are influenced:

Politicians have two main goals: (a) to execute their policies and (b) to be re-elected. Many politicians use opinion polling to choose how to strategically present their policies – rather than what those policies should be.

To do this, they use polling to persuasively highlight specific topics for the public to consider. But because the public mind is difficult to change, politicians use information about public opinion to carefully craft how they present policies and manipulate the public mind.

Power phrases or crafted talk is a strategy politicians use to persuade people towards a policy. By using carefully selected words, politicians can make policies sounds more or less favorable, depending on their intentions.[2] For example, Theresa May frequently used the words strong and stable in the General Election 2017, to encourage people to support her as a politician.

Effect on the Media

The British press are infamously partisan. ElectionAnalysis's graph[3] shows that the Labour Party received the overwhelming majority of negative evaluations, due to the hostile coverage provided primarily by the Sun, the Daily Telegraph and the Daily Mail. An interesting "blip" occurred during the 3rd week of the campaign. This was when the Conservatives launched their manifesto containing the 'Dementia tax'. The right-wing papers were unanimous in condemning the policy, which took their attention away from Labour for a short while.

The purpose of push polls is to spread rumours and even outright lies about opponents. They are political manipulation hiding behind the smokescreen of a public opinion survey. A large number of people are called by telephone and asked to participate. The survey "questions" are thinly-veiled accusations or rumours about a candidate’s personal or professional behaviour. Their purpose is to make sure the respondent hears and understands the accusation in the question, not in gathering the respondent’s opinions.[4]

EU Referendum 2016: Return Research conducted a "survey" on behalf of an undisclosed 3rd party between Apr.–Jun.2016. A Channel 4 undercover investigation revealed that questions were being asked such as "The EU costs £350 million per week, how important is that to you?"[5]

General Election 2017: Blue Telecoms is a particularly infamous example of push-polling. The Conservative Party asked the firm to telephone voters. Callers misrepresented themselves as phoning "on behalf of Theresa May and the Conservative Party". Key messages were fed to voters, for example: "It was reported in the Daily Mirror in September last year that Jeremy Corbyn is not concerned about the numbers of people coming to live in the UK and it was reported on Sky News this year that Theresa May has restated her pledge to reduce net Migration. Just thinking about these reports in the media... Does that make you more likely to back Theresa May or more likely to vote for Jeremy Corbyn?"[6] The Conservative Party was investigated by the Information Commissioner's Office and warned. A Police investigation into a breach of law is ongoing.[7]

The Government wants to know what people think about smoking in public, and in which places people find it most objectionable. The polling company decides on a sample size of 830 people (10 people from each county), and the age group should be between 18 - 60 years old. People are selected at random from a list of households, and contacted. People are asked different kinds of questions. 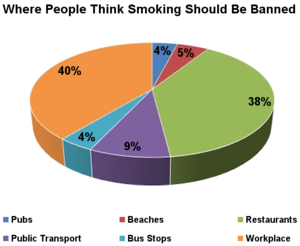 Questions to ensure they are within the sample range

Questions to determine their possible bias

Questions on second-hand smoking Do you feel that exposure to secondhand smoke is a:

Questions on banning smoking In your opinion, should the following places have (a) No smoking restrictions, (b) Smoking areas, (c) Smoking banned: