From WikiCorporates
(Redirected from PepsiCo)
Jump to navigation Jump to search

PepsiCo is an American multinational food, snack, and beverage corporation, headquartered in New York. PepsiCo has interests in the manufacturing, marketing, and distribution of grain-based snack foods, beverages, and other products.

InfluenceMap  C
PepsiCo appear to have fairly limited but largely positive engagement with climate change legislation. However, in 2013 they supported the exploitation of the Albertan Tar Sands. PepsiCo is also a member of the Business Roundtable and the US Chamber of Commerce, which lobby against climate legislation.

Walkers is the UK's leading manufacturer of crisps. Every day about 11m people bite into one of the company's products. Key brands include Quavers, Monster Munch, Dippas, Wotsits, and Sensations. ref Walkers on Sustainability: "We're trying. Honest." Walkers on Recycling: "We're trying. Honest." ref
Walkers Crisps produces 7,000+ non-recyclable crisp packets every minute, of every day, of every week, of ... etc. 38 Degrees

Quaker Oats is an American food conglomerate, headquartered in Chicago. It has been owned by PepsiCo since 2001. US Website.us, Website.uk
Major brands include: Quaker Oats, Aunt Jemina, Gatorade, Scotts Porage Oats.

Aunt Jemima is a brand of pancake mixes, pancake syrups, corn meal mixes, and other breakfast foods.
Pinnacle Foods Inc uses the "Aunt Jemima" brand for its frozen breakfast food products in the USA, under license from Quaker Oats.

Gatorade is an American brand of sports-themed beverage and food products, centred around the concept of "sports drinks".
Gatorade's Thirst Quencher is manufactured by PepsiCo from water, sugar, salt, monopotassium phosphate

(also used in fertilisers and fungicides), plus colouring and flavouring additives. It is distributed in 80+ countries.ref website 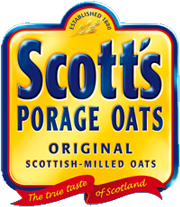 Scott's Porage Oats is a Scottish breakfast food, made from 100% rolled oats and nothing else - although the company has branched out into "Easy Pots", which contain dried milk and sugar.
Scott's is sold worldwide, packaged in a cardboard box with no metal or plastic attachments, thus making it 100% recyclable. website