From WikiCorporates
(Redirected from BT)
Jump to navigation Jump to search 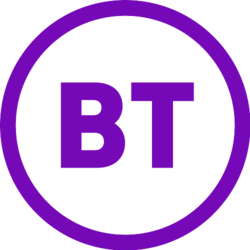 BT runs the telephone exchanges, trunk network and local loop connections for most British fixed-line telephones, and is responsible for ~30m telephone lines in the UK.[Mar.2020]. BT is the world’s oldest telecommunications company, tracing its history back to the Electric Telegraph Company of 1846.

BT's businesses are operated under special govt regulation by OfCom, the UK's communications sector regulator. In markets where it has significant economic power, BT is required to comply with additional obligations such as network access, services, and the supply of apparatus.[1]
BT is the only UK telecoms operator apart from KCOM Group Ltd to have a Universal Service Obligation,[2] which means that a basic fixed telephone line must be provided at an affordable price to all citizens in the UK. BT is also obliged to provide public telephone boxes.[3]

The UK's digital network business, connecting homes and businesses. We want to build the best possible network with the highest quality service, and make sure everyone in the UK is connected.

BT Group plc = holdco. Majority of its businesses and assets are held by its wholly-owned subsidiary British Telecommunications plc.2014,2020

BT has expanded into more profitable products and services where there is less regulation. These are principally, broadband internet service and bespoke solutions in telecommunications and information technology.ref

BT Group is organised into the following divisions:

There is no regulatory enforced structural separation of a network in the UK. However, Ofcom required BT to legally separate from its network division, Openreach in early 2017. Openreach supplies access to BT's network to other communications providers, and the purpose of the legal separation is to create a more independent Openreach which will work in the interest of all providers.[1]

The General Post Office grew to combine the functions of state postal system and telecommunications carrier, with similar General Post Offices being established across the British Empire. When new forms of communication came into existence in the 19th and early 20th centuries, the GPO claimed monopoly rights on the basis that, like the postal service, they involved delivery from a sender and to a receiver.