From WikiCorporates
(Redirected from HS2)
Jump to navigation Jump to search

is a non-departmental public body established by the Department for Transport to develop, build, and operate a high speed rail network to link London, Birmingham, Leeds, Manchester, and onwards, to services on the existing rail network, with ~553 km of track. 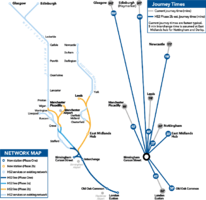 Dept. for Transport, Jun.2017[1]
Connectivity: To make it easier to travel by adding additional capacity to the existing, overstretched network, and to improve connectivity between towns and cities, particularly in the Midlands and the North, by cutting journey times and improving reliability.
Economy: By better connecting cities and regions across the UK, HS2 will open up new markets for businesses, helping to improve national productivity in line with the govt's National Industrial Strategy.[1]
Jobs: HS2 will create approximately 25,000 jobs across the construction industry and supply chain, followed by employment opportunities from operating the railway. To help people to improve their skills, around ~2,000 apprenticeships will be offered, as well as courses at the National College for High Speed Rail.[2]

CO2 Emissions: faster trains use more energy; emissions for a London — Edinburgh journey would be doubled per passenger.ref,ref