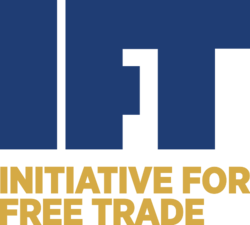 The IFT is a UK-based lobby group for free trade, launched Sept.2017. It supports a hard Brexit and says it 'sees Britain’s withdrawal from the European Union as a unique opportunity to revitalise the world trading system.'ref

IFT has teamed up with the Cato Institute's Trade Policy Unit who produced an initial draft of this "ideal" US-UK FTA. ... dear god no.

"IFT is funded by donations from private individuals, companies and corporations." End of.