> Category:Financial services in the United Kingdom

> Category:Banks of the United Kingdom

The Finance Curse: "Once a financial sector grows above an optimal size and beyond its useful roles, it begins to harm the country that hosts it. “People who might have become scientists, who in another age dreamt of curing cancer or flying people to Mars, today dream of becoming hedge-fund managers.” The financial sector does not support the creation of wealth - it extracts it from other parts of the economy. IOW, the Financial Industry is a leech.
Business' core purposes have been whittled down through ideological shifts, to little more than a single-minded focus on maximising the wealth of shareholders, their owners. Private Equity firms typically buy up a solid company, then financially engineer that company to squeeze all its different stakeholders, one by one. they borrow more against that company and pay themselves huge “special dividends” from the proceeds. Or consider the financial structure of Trainline - yet another tax haven company.
The competitiveness agenda, driving us into this race to the bottom, is intellectual nonsense resting on elementary fallacies, lazy assumptions and confusions. The race does not stop when tax rates reach zero; eliminate their taxes, appease them, and they will demand other subsidies - see Amazon, for starters.ref Linkback: KKR, PFI

The company operates through: 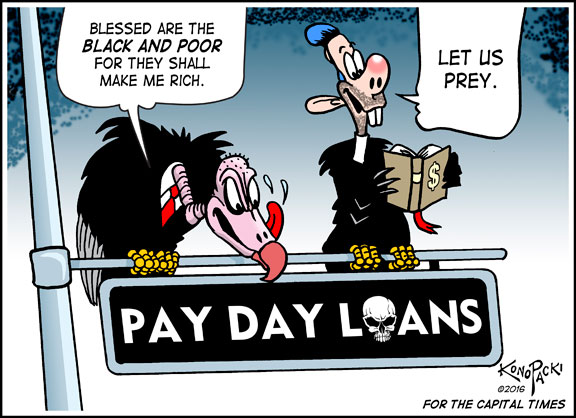 A&M Capital Advisors is a private equity arm of Alvarez & Marsal Holdings LLC. The firm seeks to invest in middle-market companies with opportunities for operational improvements, business turnarounds, shareholder liquidity in minority or majority recapitalizations and ownership transitions, distressed, buyouts, acquisitions, growth capital, special situations, and corporate divestitures or carve-outs. The firm invests in companies which are undergoing a management transition or are seeking capital for growth or acquisitions and in companies that range from true underperformers in need of operational turnarounds to stronger performing businesses pursuing carve-outs, consolidation strategies or seeking to address specific operational issues or management needs.ref Website.arch, Website

Private Equity Party
Ingram Pimm,[1] Financial Times Mar.2017.[2]
In the 1970s and 1980s a sea change in the character of the financial system and in the relationship between companies and their investors occurred — and this can be directly linked to Thatcher and Reagon's neoliberalism and deregulation policies. So-called private equity companies make $billions investing individuals' and institutions' money in private companies. Individuals who work in the private equity industry see their management fees taxed at a far lower rate (15%) than they would pay if the money were considered income (35%).[1][2]

Analysis by Ernst & Young and British Venture Capital Association found that > 50% of profits generated by private equity firms were made by piling debt onto the books of their portfolio companies. The higher the amount of debt used to buy a company, the better the return in a successful investment. If a private equity firm buys a company for £50m in cash and sells it for £100m, it makes a return of 100%. If it uses £10m in cash and £40m in debt, then the returns are far higher.[3]

Managerial capitalism: In the post-war decades, ownership of most listed companies was spread across a large number of investors, mostly private individuals who had neither the power nor the incentive to influence the firm's management. Senior executives had wide discretion in deciding how to allocate their company’s resources; some built large, unwieldy empires without much regard to the interests of shareholders. By the end of the 1970s, the ownership structure had changed. Financial institutions now held a larger proportion of the shares, and some took a close interest in the management of the firms in which they invested.
The Labour govts of the 1960s and 1970s had sought to create British-owned national champions in so-called strategic industries, but that policy was firmly rejected by Margaret Thatcher and, since the 1980s, no obstacles have been put in the way of foreign acquirers. Following the conversion of the Labour Party in the early 1990s to market-based economic policies, the general view across the political spectrum has been that inward investment in whatever form brings capital, technology and management into the UK, and strengthens the British economy.ref,p.28

Investor capitalism: With powerful shareholders pressing for higher returns, managerial capitalism gave way to investor capitalism; shareholder value came to be seen as the principal measure of corporate performance. Some of this shareholder activism was directed at companies that had diversified too widely; they were criticised for destroying shareholder value by propping up bad businesses out of profits made in the good ones. Financial predators emerged, who saw that there was money to be made by breaking up badly-managed conglomerates and either selling the component parts or floating them on the stock market as independent firms. Unless diversified companies could demonstrate that they were adding value to the businesses they owned, they were likely to become takeover targets. This often involved the sale of unwanted subsidiaries to outside investors, including private equity firms; leveraged buy-outs played a large role in the restructuring of the US chemical industry during the 1980s and 1990s. Another option was to demerge the subsidiary and to list it on the stock market as an independent company. In some cases, the effect was to transfer virtually all the industry’s capacity from the former incumbents into the hands of a new set of players.ref

The 1980s saw a wave of financial "innovation", most notably the "leveraged buy-out", a technique by which private equity firms use large amounts of debt to acquire unwanted subsidiaries of diversified corporations. As private equity firms acquired greater experience, they acquired entire companies in the same way. Here's an (infamous) example of how a leveraged buy-out works:ref,ref,ref

In the UK, acquisitions by foreign companies are made easier by the fact that, in contrast to Germany and some other European countries, most British companies are owned by a wide spread of investors, mostly financial institutions, which have no long-term commitment to the business; if a bidder offers a high enough price, they are generally willing to sell. This is one of the institutional factors which underlies the restructuring that has taken place in British industry over the last 30+ years.
In contrast, for example in Germany, “firms are social institutions, not just networks of private contracts or the property of their shareholders“. In the so-called Rhineland model of capitalism, companies pursue growth rather than profitability, invest steadily in the development of new products and processes, provide stable employment for their workforce, and have strong obligations to the communities where their plants are located. The system has been modified in recent years as a result of the growing presence of foreign shareholders but Germany has moved only part of the way towards the Anglo-American model.ref, p.28

ToDo: The evolution of private equity: corporate restructuring in the UK, c.1945-2010, The economic impact of private equity: what we know and what we would like to know, Financial institutions and corporate strategy, What is Private Equity?, Why Private Equity Keeps Wrecking Retail Chains Like Fairway, Dell Officially Goes Private: Inside The Nastiest Tech Buyout Ever, [https://www.institutionalinvestor.com/article/b15bvrspw3fq7q/private-equitys-trail-of-bankrupt-retailers Private Equity’s Trail of Bankrupt Retailers], The Cause and Consequences of the Retail Apocalypse

, website, A/cs CH, Herald Investment Fund plc Bloomberg
The Herald Investment Trust specialises in achieving capital growth through investing in companies in the areas of technology, media and communications.
The Herald Worldwide Technology Fund is an Open Ended Investment Company which seeks to achieve capital growth, in excess of the average, by investing in quoted companies in the technology, communications and multi-media sectors.

The LSB is a self-regulatory body in the financial services industry. It publishes the voluntary Standards of Lending Practice, which set the benchmark for good lending practice in the UK, outlining the way registered firms are expected to deal with their customers throughout the entire product life cycle. There are separate Standards for personal customers and business customers, as well as other voluntary standards such as the Banking Standard.
There are 25 firms registered with the Board, plus 7 Debt Collection Agencies and Debt Purchase Firms, as of Dec.2018.ref.
About, Stakeholders,

The BSB was born out of the parliamentary commission on banking standards in 2015, and was meant to be the industry’s answer to public outrage over the Libor-rigging scandal and widespread failings that contributed to the 2008 financial crisis.
BSB membership is voluntary; major US banks Goldman Sachs and JP Morgan and UK bank TSB are not registered with the body.