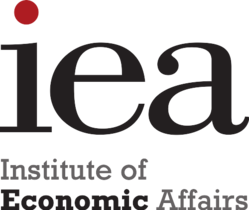 [2]
Member of the Atlas Network

IEA is a free-market think-tank, established in 1955 by admirers of the free-market economist Friedrich Hayek

. Its mission involves "analysing and expounding the role of markets in solving economic and social problems".[3]

The IEA calls for the removal of tariffs, and advocates deregulation in the financial sector. It also calls for opening all services to competition, including the National Health Service, as well as scrapping many of the EU regulations on Data protection, Pharmaceuticals and Food safety and Chemicals, and reducing taxes. It suggests civil servants could be replaced by politically-appointed trade negotiators.[4]

Darren Grimes, formerly of BeLeave, is now working for the IEA as their "Digital Manager" - a reward for a job well done?[5]

The IEA did not take a corporate view on Brexit, although current Director General Mark Littlewood was a vociferous advocate for Leave (a long way from his days as press officer for the pro-EU Conservative Party). But over the years the IEA has regularly been a vehicle for the publication of a variety of pro-Brexit material, such as the 1996 paper "Better Off Out?", culminating in its organisation in 2013 of the €100,000 Brexit Prize, which attracted more than 100 entrants submitting blueprints of how Britain’s future could look outside of the EU. [6]

The IEA has regularly received substantial amounts of money from Tobacco companies, and may continue to do so. It has consistently spoken out against tighter tobacco regulations, claiming that introducing tobacco display bans could lead to "a deterioration in public health".[7]

None disclosed, nix, nada, zilch. The IEA is registered as an educational charity, and therefore does not have to declare its donors; however, it is widely known to have been backed by Tobacco, Alcohol and Oil companies, amongst others.

The ITCU was established to present independent nonpartisan advice on the challenges and opportunities the UK faces as it negotiates its departure from the EU and seeks to establish new trade relationships with other partners. Members of the Advisory Board act in an advisory capacity to the IEA and serve in their individual capacity.[8]
ToDo: